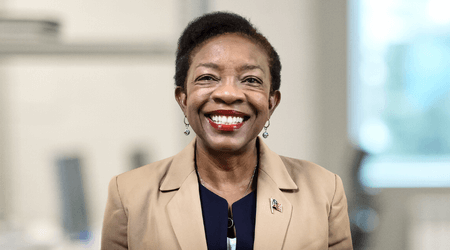 Debra J. Gammons joined the Charleston School of Law Faculty in January 2009 as the acting director of diversity initiatives (now the Director of the Office of Diversity Initiatives) and a Distinguished Visiting Professor.

She received her Bachelor of Arts Degree from the College of Charleston with a major in English, and her Juris Doctor from the University of South Carolina School of Law.

Professor Gammons was President of Student Government and President of the Peer Mentor Association at the College of Charleston.  She was a member of Omicron Delta Kappa and Alpha Phi Omega National Service Fraternity.  Upon graduation, Professor Gammons won the highest award given by The College (Bishop Robert Smith Award), the McConnell-Mood-Mohrmann Student Government Award, Lucille S. Whipper Award, and several other awards.

Professor Gammons began practicing law in the Solicitor’s Office in Charleston. Before joining the Charleston School of Law, she served as Assistant City Attorney for Greenville, South Carolina for eleven years, where she prosecuted criminal cases and represented the City of Greenville in civil actions.

While in Greenville, Professor Gammons served as President of the Greenville County Bar Association.  In addition to serving as Assistant Solicitor and Assistant City Attorney, Professor Gammons has practiced and still practices in the private arena, litigating cases of medical malpractice, personal injury, child custody, divorces, and criminal defense; she has represented Plaintiffs and Defendants in civil cases.

At Charleston School of Law, Professor Gammons teaches Criminal Law, Constitutional Law, Sex and Gender Issues and the Law, and Trial Advocacy.  She also serves as the Director of the Office of Diversity Initiatives.