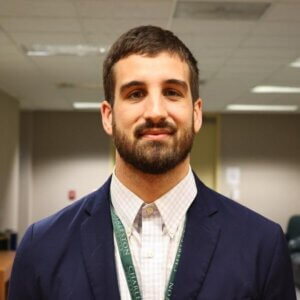 Charleston School of Law students were given the opportunity to take a front row seat at a special session of the United States Court of Appeals for the Fourth Circuit held in Charleston last week.

“As a law student, it gave us an opportunity to see great lawyers argue in front of one of the highest courts in the land,” said Shane Hursh, a 2L student at Charleston Law. “It was an incredible experience.”

Hursh was one of two dozen Charleston School of Law students who attended the oral arguments that were held in the Sol Blatt Courtroom at the federal courthouse. The special session was held in connection with the Federal Bar Association’s annual convention and meeting in Charleston.

“One of the best parts of the experience was the familiarity with and knowledge of the topics due to our legal education,” said Hursh. “When terms such as curability, performance, standing, searches and seizures all came up, my peers and I understood the elements that the party would have to meet. This led to an engagement with the argument, specifically thoughts on how we would answer a judge’s question or address an aspect of the case.”

“We are grateful to the Court of Appeals, including Chief Judge Roger Gregory and Clerk of Court Patricia Connor, for making this wonderful opportunity happen for students,” said Dean Larry Cunningham. “Special sessions like the one in Charleston are valuable educational experiences for students, many of whom will go into litigation after graduation.”

The first case was a contract dispute, followed by a jurisdiction dispute, and the third and final case was a criminal prosecution.

“It was a great opportunity for us to hear about the appellate court from the judges’ perspectives,” said Hursh. “The oral arguments were engaging, educational, and inspirational – and I know that all of us students in the courtroom are eager and excited for our first cases in front of an appellate court.”

Charleston School of Law provides students with a variety of events and organizations as part of our holistic approach to learning and practicing the law. Learn more about our student organizations and experiential learning programs on our website at charlestonlaw.edu.