South Carolina senator and attorney at law, Marlon Kimpson, spoke to Charleston School of Law students today at the Charleston Museum Auditorium. The event is part of the law school’s celebration of Black History Month organized by the Office of Diversity.

On Valentine’s Day, Kimpson delivered a passionate message to the next generation of legal professionals. “We have too many mediocre lawyers,” he said. “We need great lawyers.” 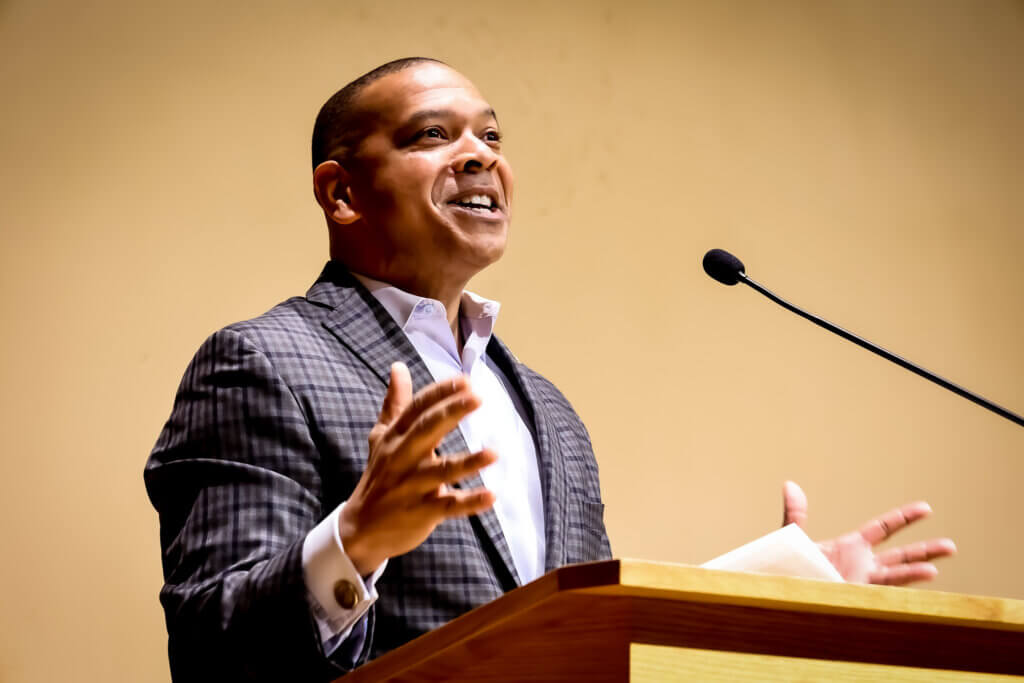 “In life you’ve got to find your calling,” he said. “I knew that being a banker was not my calling. Why? Because when you find your calling, you don’t mind putting the time in whatever it is you do. You’re not looking at the clock.”

The Senator from South Carolina confessed he found his calling while attending Morehouse College.

“Dr. Martin Luther King Jr. is a graduate of Morehouse,” noted Kimpson. “Benjamin Mays from Greenwood was president of Morehouse College. Maynard Jackson, the first African American mayor of Atlanta, went to Morehouse,” said Kimpson. “He taught me that it’s not good enough to be number two, you got to be number one; you want to be great. I don’t accept mediocrity, not in my law practice, not in my home. I challenge my children to be great.”

During law school, Kimpson applied for a federal clerkship and worked under the Honorable Judge Matthew James Perry Jr. The work transformed his life, personally and professionally.

“Now why is he important?” asked Kimpson. “No. 1, Judge Perry was the first African American federal court judge in South Carolina. He was a civil rights icon. He desegregated schools. He went to jail for standing up for injustice. The federal courthouse in Columbia is named after Judge Perry.

“He couldn’t sit at the same lunch counters that his colleagues. He couldn’t swim in the same pool,” said Kimpson. “He was denied many of the opportunities of his white counterparts. Imagine fighting a fight with your hands in cuffs tied behind your back? But he didn’t complain. He just did his job and became great.”

Kimpson said the clerkship and mentorship under Judge Perry taught him two important values: character and relationships. The future senator said whenever he had the opportunity to be around the legendary judge, he would watch, listen, and learn.

“He was so courteous,” remembers Kimpson. “We would go to lunch and it would literally take us 20 minutes to get outside the courthouse because he was holding the door for everybody. So, my education at Morehouse College and the mentorship of Judge Perry, I learned mediocrity was not an option for Marlon Kimpson.”

Kimpson leaned in and urged the law students to invest in each other. Build relationships with colleagues and faculty.

“You can do good in school, but there’s so much more to practicing law than just getting a good grade,” he said. “You got to take the time to know your colleagues first year. Relationships matter.”

Kimpson, a member of Motley Rice Law Firm, his legal work has been dedicated to serving asbestos workers injured by occupational disease, employees and investors whose retirement funds have diminished due to fraud, families devastated by transportation accidents, and students whose civil and human rights were violated. He was elected to the State Senate in 2013 and serves the residents of Senate District 42 and all South Carolinians.

editors note: The following are excerpts from Kimpson’s student Q&A. The content is not exhaustive.

Mary Catherine Rogers: I graduate in May and I know a lot of my colleagues are looking for the jobs now. How do you recommend having conversations with our employers about splitting your time between your job and pro bono work?

Kimpson: “I think whatever law firm you ultimately work for is probably going to be encouraged to allow young lawyers to spend their time doing pro bono projects. We’re at a time in our country where there are a lot of people in pain. You’re fortunate. There are many people who can’t make ends meet and they need help. That’s what our profession is for. It’s going to make you well rounded. You go to a big firm, and oftentimes you don’t get outside of your cubicle. Pro bono work is very, very important. Get out of these cubicles. Go meet people in the community. I think you will be better for it. I think you had a question.”

Charleston School of Law student: What advice do you have for a 3L with aspirations of working in politics?

Kimpson: “We need lawyers in the general assembly. Politics without economics is a symbol without substance. When you look at the members of Congress, most of them come from trust funds. You have got to get an economic base first in my view, before you enter politics, unless you are independently wealthy.”

Charleston Law student: My niece is graduating high school. She wants to go to Stanford for the dual program after she graduates college, but she wants to go to Georgia or Clemson just for the higher name instead of a historical black college. How do you convince her that the Georgia degree doesn’t necessarily mean more than Morehouse?

Kimpson: That’s a constant question. People in my firm, particularly the African-American associates, I tell them that it’s challenging to be in an environment where you don’t see anybody that looks like you.”

5 Tips to minimize stress and anxiety during finals

5 Tips to Minimize Final Exam Stress and Anxiety Final exam week begins Monday at Charleston School of Law and one thing is for certain,

Fall Commencement details released Charleston School of Law will hold its Fall 2022 commencement ceremony on Saturday, December 17 at 5:00 p.m. The event will

Meet our Faculty in Five Podcasts

The Charleston School of Law is proud to have a team of experienced and successful faculty. They share their knowledge in this podcast series.