The Journey is a series of short stories highlighting graduates from the Class of 2022. In our latest feature, Shelby Sipe shares her journey from prospective law student to U.S. Marine.

Sipe earned her undergraduate degree from the University of Toledo and arrived at Charleston School of Law in Fall 2019. She was an active in student organizations, serving as Editor in Chief for MALABU, Sol Blatt Jr. Law Library Research Fellow, vice president of external competitions, for Trial Advocacy and as a BARBRI ambassador.

This Saturday, she will join the Class of 2022 graduating class for Commencement. 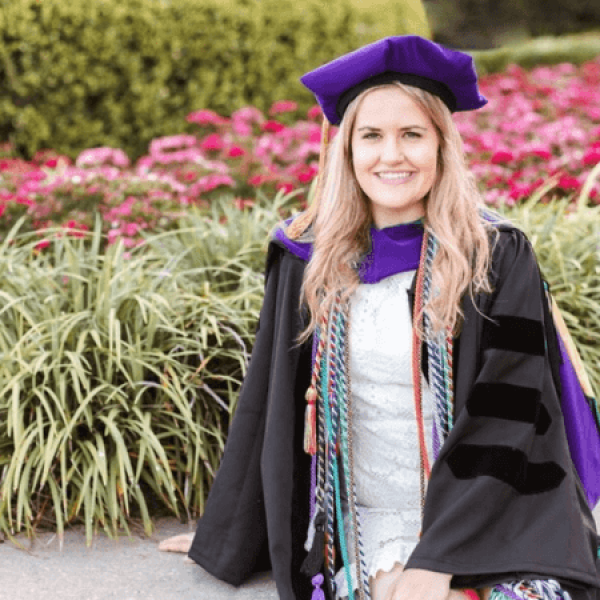 Shelby Sipe watched the spring sun set over the Cooper River Bridge while she pushed her way through Yoga on the Yorktown, a 90-minute workout and fundraiser for the Warrior Surf Foundation.

“When I was walking out, I asked a guy, ‘Can I go into the Medal of Honor Museum?’” said Sipe.

What happened next changed the trajectory of her life.

Alone, Sipe scanned the names and stories of more than 3,500 medal of honor recipients. In awe of the courage and bravery, she said she also experienced “a wave of emotion.”

“I really thought I was going to work at this big corporate firm,” she said. “I really enjoyed that atmosphere. I thought that’s the life I wanted. But as I’m sitting in the medal of honor museum and reading all the names, it was overwhelming. I was like, okay, this is my calling.”

With the experience lingering in her mind, she applied (and was accepted) to the Navy JAG program, but she turned down the opportunity after a chance meeting with friend and fellow Charleston Law student, Derek Hall.

Hall, a 1L student at Charleston Law and Marine lieutenant asked, “You never sat down with the Marines. Why?”

“I sat down with all the other branches — Air Force, Army, Navy, Coast Guard — but I skipped the Marines because I thought, that’s too hard for me. I will never survive. They don’t have a lot of females. It was a misperception I had.”

Hall encouraged her to apply, and she did.

The Marine recruiter told her, “I think that you are more of a Marine than you think you are. You have the personality we’re looking for. You are dedicated. You won’t give up even when it’s hard.”

“I said, okay, whatever,” said Sipe. “I took his business card, but I did not come back right away. But I just kept looking at the business card.”

She eventually emailed the recruiter. “I’ve been waiting for your email,” he wrote back. “Why don’t we set up the official interview?”

“A week later I was training four, five, six days a week,” she said. “Then I took a month off. I just felt like I was constantly failing at it. But I needed that month off to realize how much I loved it, because you don’t realize how much you want something until you don’t have it anymore.”

“I would say that’s probably the mindset of almost every Marine I’ve ever met,” said Sipe. “It’s competitive. It’s difficult. It’s physically and mentally exhausting. It just makes me want to do it more. It becomes addictive — in a good way.

“That’s been my mindset my whole life,” she said. “Anytime I say I can’t do something my mom reminds me when I said I couldn’t do a tuck in high school gymnastics class and then one day I said, ‘I’m tired of failing’ and I just did it. Everyone said, ‘You can’t be a Marine judge advocate. I said, okay, watch me.”

Three years ago, as a 1L, Sipe sat across from Charleston Law professor William Janssen in tears. “I don’t think law school’s right for me,” she told him. “Maybe I need to transfer. Maybe it’s just Charleston. What’s going on?’”

Janssen encouraged her through the valley.

“Professor Janssen was my first real conversation with a professor and he’s the reason I’m still at this law school.”

Student success is a priority at Charleston School of Law. Janssen and the faculty at the school are committed to helping students find their call in and out of the classroom.

“What made leaving the practice of law inviting to me was the unusual ‘student-first’ emphasis that the Charleston School of Law was cultivating,” said Janssen. “Students are our primary focus. Classroom excellence and student mentoring is our mantra.”

After Sipe crosses the stage, accepts her degree and shakes hands with Dean Cunningham, she will set her sights on bar prep while, at the same time, preparing for the next step of her journey: To become a Marine JAG.

The judge advocate program requires a physical fitness test (PFT). “Then, depending on your score, you get contracted, and the selection board decides whether they’re going to take you for the next officer candidate school (OCS),” explained Sipe. “I’m up for September. So that’ll be right after the bar exam, I’ll get my bar results and then go to OCS.”

OCS and basic training (TBS) are 10-week programs in Quantico, Virginia, followed by Naval justice school, another 10-week program in Newport, Rhode Island with the Navy, and Coast Guard. By the end of 2023, Sipe will have a law degree, passed the bar and “I can say, I’m a United States Marine. That’s the end goal.”

“If you want something bad enough, you’re going to do it,” said Sipe. “That’s where I’m at right now with the Marines: Watch me do it. I’ll work out six times a week, then I’ll do some more after that. Even if I complete it, I’m like, okay, the next thing.”